Ah, the sweet cherry blossoms are bursting forth! 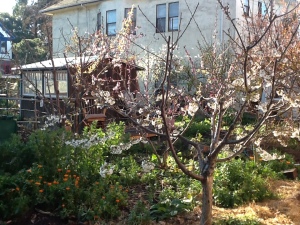 You have to look closely in this photo, but the branch closest to the camera suffered in the great fire of 2017 that took out my mulberry tree and beekeeping shed. This cherry tree was growing next to the shed and, post-fire, had black limbs. I trimmed those off, and left that upright branch that seemed to be alive. They are blooming and leafing out, just more slowly than the rest of the tree–it’s about a week behind the non-fire scorched limbs. But why?

My theory is that the heat of the fire reset this limbs sense of chill hours. So most fruit trees like apples, cherries, pears, etc need exposure to cold temperatures–that is, they need to know that winter happened. A chill hour is an hour of temperatures below 45 degrees. So when you buy a fruit tree, you need to look at the tag and make sure your area has the same number of chill hours recommended on that tree’s tag. In the East Bay, we get between 600-800 chill hours, depending on where exactly you live. (If you live in California, you can look up your chill hours here.) There are varieties of apples that need, for example, 1000 chill hours in order to stimulate blooming and to set fruit, so it would be a poor fruit producer here, but in Minnesota, look out!

But what about my slow-to-bloom cherry limb? It got the same number of chilling hours as the other branches. I’m wondering if the idea that extra warm temperatures can cancel out some chill hours is at work. There is a different model that UC Davis uses, called the Dynamic Model, which uses something called Chill Portions instead of hours. Here’s what they say: “The model calculates chilling accumulation as ‘chill portions’ (CP), using a range of temperatures from ~35-55°F (some temperatures are more effective than others), and also accounts for chill cancellation by fluctuating warm temperatures.”

Maybe my conflagration was like a super warm temperature that reset the tree’s chill hours? Send any theories my way….

P.S. Note that my cherry tree is pruned in an open center pruning style. Not ideal for cherry trees–that’s more of a peach thing. According to Stella Otto’s the Backyard Orchardist, cherries should be on a modified central leader. I wish someone told me that 7 years ago!

Whoa, took a trip out to Frog Hollow Farm yesterday. It’s in Brentwood–how have I never made it out there before? Sheesh.
I learned more about fruit trees in the two hours that I spent there than I have in 5 years of my own experiments on my urban orchard. Farmer Al is full of good information. One thing I learned was that I have been pruning my cherry trees all wrong. I guess now that I think about it, I’ve been pruning them like apricot or plum trees. But cherries are pretty lightweight, and you want them to make lots of branches, which will them make lots of fruit. So you can prune their tips–breaking the apical dominance and encouraging new branching below the tips. Gonna get on that–you should too!
While pruning, we discovered this little guy: 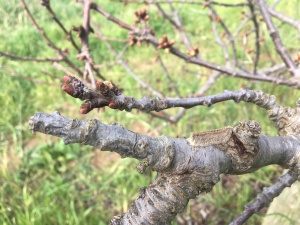 This month–according to my favorite x-cto knife wielding calendar maker, Nikki McClure–will be ASTOUNDING. So far, she has been right. All this rain has made everything seem possible again. I’m looking at new projects with a new hopefulness and light. Garden beds are fertile-seeming. And most astounding, is my mulberry tree, after being burnt down in a fire, is sending up new life.

Let me explain. On November 17, 2017, I awoke to a strange popping noise. I figured it was gunfire, a sometimes occurrence in our neighborhood. But then it went on and on. Then I thought it was someone popping some of that bubble wrap. Then the front door went, Whoosh! And I got up quickly. Whole garden engulfed in flames. Yup. It was bone dry in November, lots of dead leaves everywhere, maybe lit up by an errant cigarette? Anyway, I lost a beautiful shed that held all my beekeeping equipment, a car parked in the driveway, and worst of all…my mulberry tree.

I bought the tree from Daniel at Spiral Gardens probably 10 years ago. It had grown into a beautiful tree, sending out verdant shoots early in the spring, followed by hairy white flowers, followed by the most delicious, juicy blackberry-like fruit. Punk rockers down the street would stand outside the gates, where the tree peeked its branches over and feast on the fruit. Kids would climb the tree and get covered in purple juice, head to toe. It washed out. One kid even “painted” our car with her mulberry handprints. Now it was a smoldering stump.

I gave it up for dead. I bought another tree from Daniel. Planted it on the corner of 28th and MLK with the help of some glorious volunteers. The idea being, even more people will get to enjoy the mulberries, once it grows over the fence in the next 5 years or so. The scorched earth area, I decided to plant some pear trees that I could espalier against the fence. But then the other day I went outside and a wink of green stopped me dead in my tracks. Underneath the blackened remains of the mulberry tree was a new shoot of life, with the unmistakable shape of a mulberry leaf. 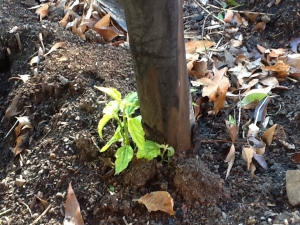 Remember that book, The Giving Tree by Shel Silverstein? The little boy takes everything from that apple tree–her apples, her branches, even her trunk. By the end of the book she’s only a stump, the boy is an old man, and now he can sit on her. But if that story kept going, I like to think, and this mulberry proves–the trunk isn’t dead. It can regrow into a tree. All we have to do is give it a little time. Astounding.