Ok, it’s really hot today, and I’m sure my tomatoes will ripen and ripen through October, but I’m feeling like it’s time to look back at the summer garden and take note of successes and failures in the tomato patch.
Sungolds
This is my favorite cherry tomato and I plant it every year. It’s an F1 hybrid but what a delicious pineapple-y treat. It must be a complicated cross because no one to date has stabilized this one. I practiced restraint and only planted one. Thank god, I’m still behind picking this orange cherry tomato, which grew to 7 feet tall. Every day I can pick a basket of them, and feel like I got away with something when I see them for sale at grocery stores for $6 a basket. When I’m not eating them fresh, I roast them in the oven with olive oil, then freeze this concoction in jars for the long Oakland winter (snicker snicker). Also dehydrated some and they taste like sour/sweet raisins. Yum.
Paul Robeson
A delicious black tomato, named after activist and actor Robeson. The taste of this kinda big but not quite beefsteak is incredible: meaty, rich, sweet. But the texture is just too soft. They are crushed by even a sharp knife. Very low yields this year–I think I’ll skip next year. Anyone have a fav black slicer to recommend?
San Marzano
These are just starting to ripen. I bought them as plants from a lady at the farmers market, and some of them are large and meaty but one plant is making tiny little mealy fruit. I really need to get some seeds from Vincenzo, Rosetta Constantino’s father. Every year he saves seeds from his San Marzanos brought from seed from Calabria in the 1970s. So good when split in half, drizzled with olive oil and some thyme, and roasted in a slow oven. God.
Early Girl v Dirty Girl
In 2005 Monsanto, the agro-company that makes Round-up, bought Seminis, a seed company that was the breeder of a beloved tomato called Early Girl. In California, Early Girls were “dry-farmed”, which produced an amazing flavor bomb that I loved to can away for the winter. But many farmers don’t want to buy anything from Monsanto. So, Joe Schirmer, of Dirty Girl Farm in Santa Cruz spent the last 5 years stablizing the hybrid. And now: I present The Dirty Girl. I planted four of these and four of the Early Girl. The Early Girl is the bigger one on the left. And no, I swear those aren’t rolling papers next to the plate of tomato. 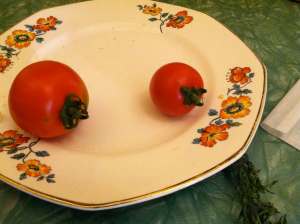 Besides a size difference, the tomatoes looked exactly the same, inside and out. 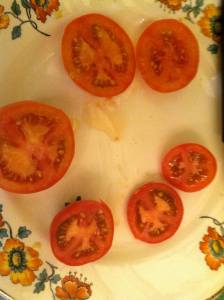 As for the taste? Dirty Girls were just as rich, just as concentrated in flavor as the Early Girls. Which means that next year, it’ll be Dirty Girls all around! Go Joe; and thank you.

And what do I do with all these ‘maters? Planning to can some but right now fresh eating is all I can do. Had an amazing snack with them the other day: the tomato tops were cut off and sprinkled with salt, pepper, and bits of basil, then a Lebanese anise flavored alcohol, Arak, was poured over said tomatoes. Left to marinate for 30 minutes and then slurped up. The best new thing I’ve tried in awhile, especially on a hot day. More Lebanese canning stories soon. Stay cool…. 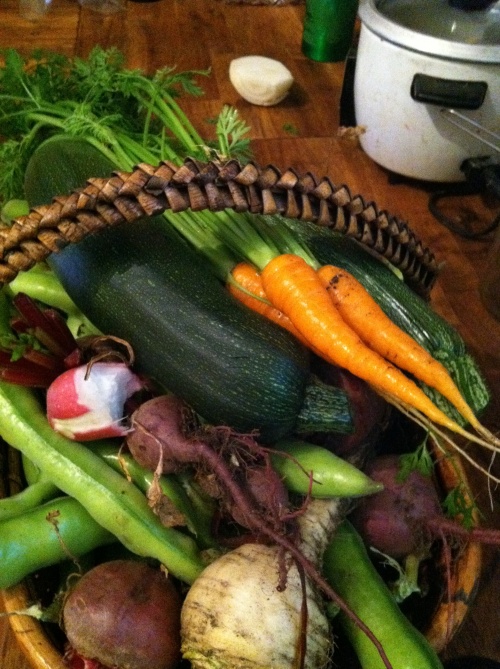 Franster (and her dolly) helped me harvest some new potatoes, too. I grew these in a metal garbage can with holes tapped into the bottom. It was a bit of an experiment to troubleshoot a problem I have with volunteer potatoes in the garden. I somehow never get them all out of the ground and then I get potatoes where I didn’t want potatoes anymore. The idea was to keep them contained by planting them into a garbage can. After three months, I only got a few bright red potatoes. 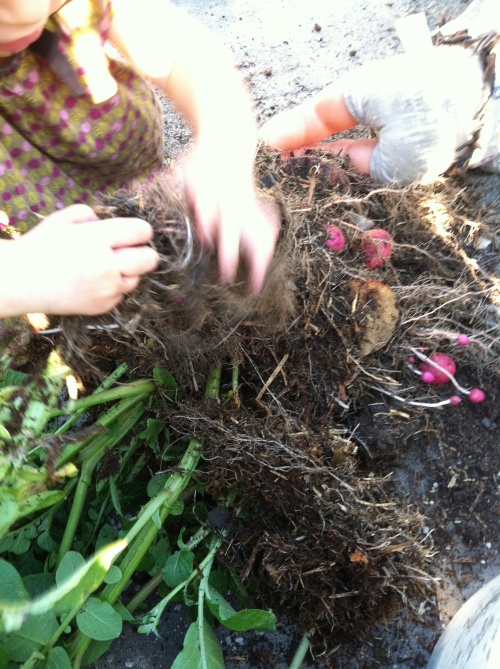 The problem was that the can required so damn much soil. I had to really scrounge to find enough to cover up the potatoes as they grew. And I harvested too early (the plant was just flowering). But I needed that garbage can soil for another potato tower I’m growing, this one made out of a smith and hawken stacking composter. Will post results of that experiment.

First Zucchini of the Year 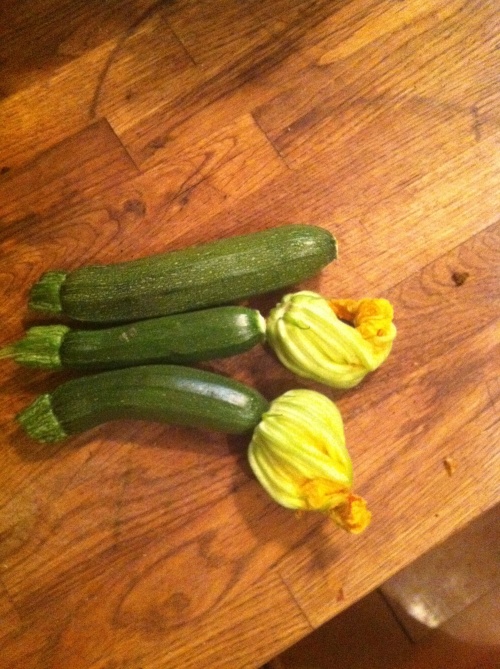 I actually don’t love eating zucchini, but of course I planted two bushes, forgetting what prolific little buggers they are. Summer squash always remind me of those warm, light-filled days, when the living is easy, and you can just go out to the garden to harvest whatever you need for dinner. Love that. My sister was here and made an amazing chard fresh pasta and put the first of the zukes plus their flowers over the pasta. Yum.

So, workday is on for today, May 2. 3-5pm, 663 28th street, oakland. It’s going to be very hot, so bring water. I think we will be transplanting strawberries and weeding. See ya! Payment will be in greens, salad mix, and my eternal gratitude.

Gearing Up For Spring

This is a miracle: I have planted all my tomatoes already. I think it’s the first time I’ve finally realized that I live in California, and as such, I can plant stuff early early early. I tucked them under floating row cover to keep them warm during the chilly nights. I snagged some Early Girls from Kassenhoff Growers that I plan to dry-farm. 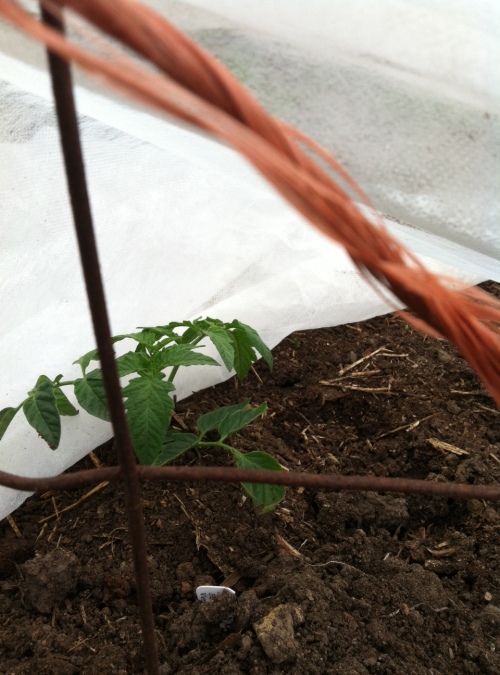 Planted three San Marzanos for canning, and two Sungolds for cherry tomatoes. I’m hoping to later get two starts of my personal favorite tomato: the amazing Paul Robeson, which I’ll probably get from Daniel at Spiral Gardens in South Berkeley.

Yesterday I also planted radishes, and added another super to my very healthy beehive. I feel so lucky to have access to my big-ass garden: Franny has taken to wandering out there in the morning to do some digging and dirt-eating.

Even if you don’t have access to a garden–for whatever reason no land, no green thumb, no time–there is something you can do this upcoming spring to ensure you’ll have a steady stream of delicious vegetables: sign up for a CSA! A CSA is an acronym for Community Supported/or Sustained Agriculture. Basically you find a farm that you believe in, promise to pay for a weekly box vegetables for a season, and then get ready for a beautiful onslaught of produce every week. CSA works great for the farmer, who god knows, needs a steady stream capital to buy seeds and property taxes and infrastructure. The consumer not only gets a share of the produce, they get the satisfaction of supporting a farmer.

If I didn’t have a garden, I would subscribe to Live Power Community Farm‘s CSA box. Live Power is a unique, amazing, draft-horse powered 40-acre farm up in Covelo. I’ve spent a few weekends there and I can say without a doubt, the produce is the most delicious I’ve ever tasted. I distinctly remember biting into one of their green gage plums, and almost crying it was so tasty. Live Power is a biodynamic farm–which goes well beyond organic standards. Gloria and Stephen are the farmers, and you’ll never meet cooler people. The care that goes into their land is palatable. You should see their compost piles. Incredible. And, the only way you are going to get Live Power produce is by subscribing to their CSA share–they don’t sell at farmer’s markets. Know that you’ll be embarking on joining a community, too. It’s not just a drop off of produce–in fact, twice a season, you’ll help pack the boxes and get to meet all the other members. It’s a great supportive community. I’m actually starting to feel jealous… So, sign up by emailing their membership coordinator: jeaner.27 at gmail dot com! They serve Marin, SF, and the East Bay. You’ll need to sign up by March 30; their season runs from May 18-December 7.

Reminder: Garden day is on for Thursday, if it’s not raining. 3-6-ish, at 2727 MLK. I rented a concrete cutter from the tool lending library so if anyone has power tool skills or aggression toward pavement, please please join us!

I’m newly discovering boundaries. In the garden. Before I liked to just make big berms, toss some seeds in, and call it a garden bed. But then I noticed people seemed to not know it was a garden bed and would stand there, on top of the lettuce. Of course you can’t blame anyone–how would they know? So, I’ve been dabbling with different border materials. One rule: they must be free.

The first came about because I had a bunch of these cinder blocks around. I think I found them on a corner a few years back. So far they are making a good border. Obviously they are sturdy. I like that I can plant into the little holes–herbs only, though, because I think once summer hits these blocks will get hella hot and dry. There’s something very Soviet era about this garden bed. Not sure I love it. 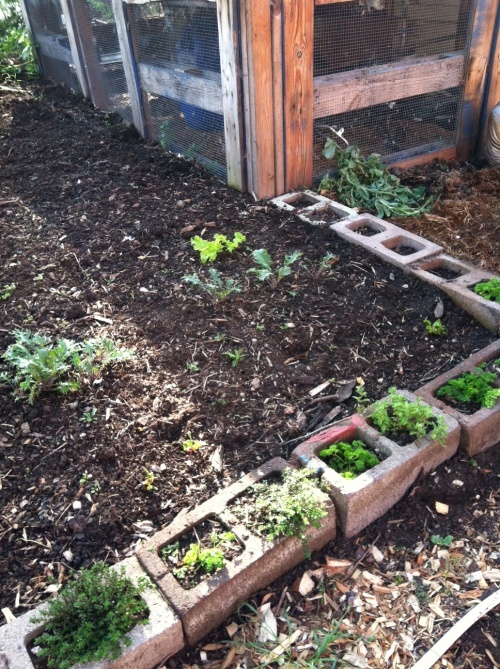 Then there’s this totally jankity bed. 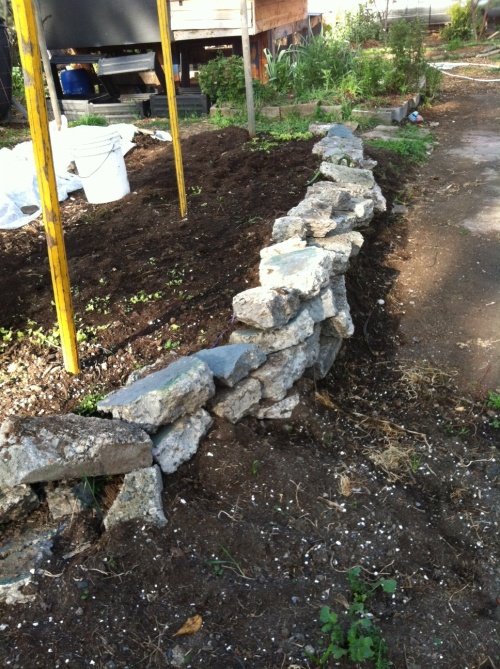 One of my volunteers delicately mentioned that she wouldn’t want to use these slabs of concrete as edging. “Why not?” I asked, so proud of my stacking abilities. “It looks a little…messy.” Now that I look at the photos, she is absolutely right. I am not smitten with this material. But, have I mentioned that it is free?

Finally, my fav: stumps. This too is pretty messy looking. But a woodsy mess as opposed to a rubble mess. 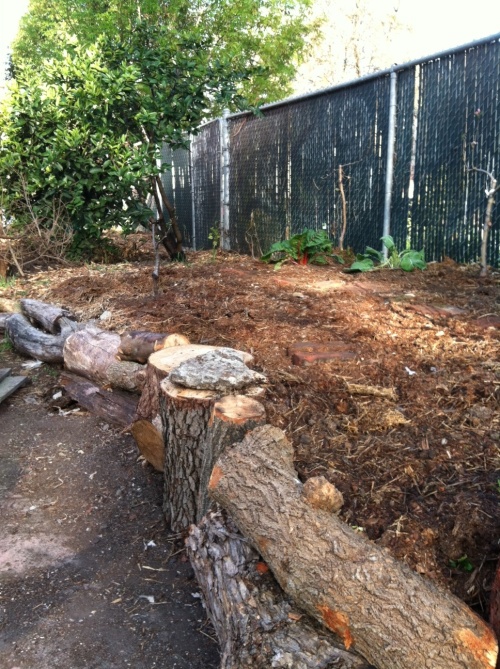 Here’s the car that loaded all the stumps. I nearly destroyed the leaf springs or something like that. You can find more stumps and logs at Hearst and 4th in Berkeley, near Import Tile, where the day laborers wait. And maybe you’ll see me too. I don’t think I’m done yet. 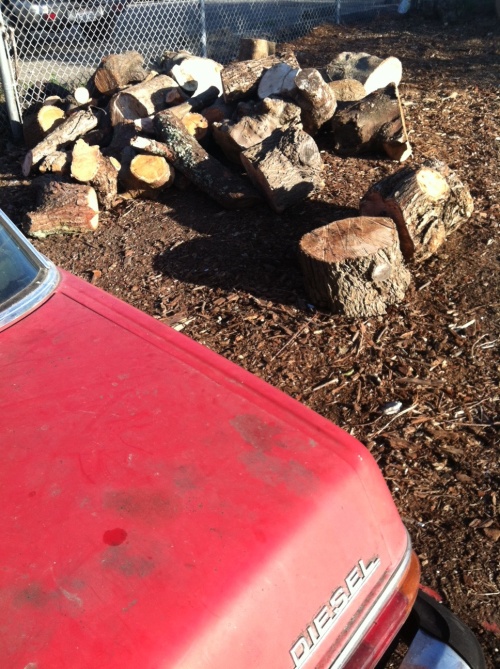 Yeah, I talk in baby talk now. Like taters and maters. I slur a little bit to create a country kind of twang.
So…dry-farmed tomatoes. I did it this year, with stupendous results. 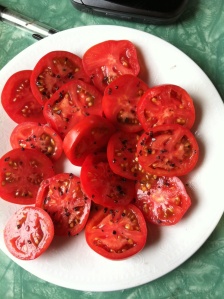 The skins are very sturdy (don’t want to say tough) and inside is the sweetest, juiciest yum sweet tomato. This is a plate of them with black sea salt from that new cool spice shop called the Oakland Spice Shop on Grand. They are also very good to can, as they hold their texture and don’t go all wobbly in the jar.

Why are they so damn good? Basically I tortured them. The French say the grapes must suffer in order to make the best wine. Same principle with dry-farmed tomatoes. Here’s how it works. In the spring you amend the future tomato bed with a deep layer of compost goodness and a thick layer of straw mulch. Then let the winter/spring rains do their thing. Before planting the tomato plants, soak the area with plenty of water for a long time, then plant. As they grow, keep them irrigated. Then, around May (this is in the Bay Area when you can plant maters in March, later in other areas), stop giving them water entirely. Because of this lack, they will look terrible, unhealthy: 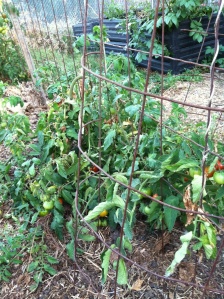 (Note that I should have staked them up but I’ve been distracted) As the hot summer goes on, you might even feel bad. But don’t water them!! Having no water makes them dig their roots in and make some tasty sacrifices–what they give up in vegetative growth, they give to the fruit. Small fruit, mind you, about the size of a golf ball. But they are flavor explosions!!! Not only does it make the best tasting tomato ever, it also saves water. That’s a win-win.

I didn’t grow enough to can them (that’s where my duck barter comes in) but they are a wonderful snack or salad addition.