Coming to a Town Near You?

I wish I had the gumption (and could convince the goats, rabbits, hens, and bees) to load up into a car and drive around the US of A to promote urban farming. Based on some of the comments you’ve sent from places like DC, Philly, San Diego, and Boston, I would be welcomed with open arms. That sure is a good feeling. I was in Los Angeles yesterday and couldn’t believe how many people were into urban farming and wanted to show me their farms and learn more about what I’ve been up to–but there just wasn’t enough time.

And so hatched the DIY Farm City Tour idea.

My dear publisher paid for me to go to Seattle, Portland, New York, and Los Angeles. But I want to see what’s doing in Chicago, Boston, Detroit, St. Paul, etc, etc, etc–I want to see urban farms all over America! But how will I pay for that?

That’s where you come in. If you’d like me to come to your town, please send me an email at novella.carpenter at gmail, or just comment belo with ideas. Let me know if you’d like me to teach a class about chickens, rabbits, or just give a reading from my book. Include the names of bookstores or spaces where workshops could happen in your town. I’m targeting October as the perfect month for the DIY tour.

What: Novella in your town, teaching or talking about urban farming

How: She’ll need to raise money to cover airfare (you and your friends have to promise to put money in the hat or hold a fundraiser or charge for a cool class that I’ll teach)

How 2: She’ll sleep on your couch

Where: urban farms in your city, bookstores, master gardener classes, universities even

Please send me proposals, ideas, criticism, as soon as possible so I can start contacting venues and setting up dates. The ideal is to pair up with a local bookstore so they can sell copies of my book. 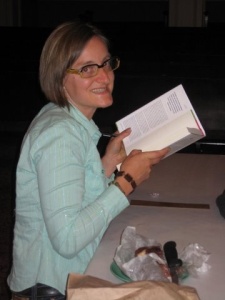 Can’t wait to meet you! And yes, that is a fake smile that I promise not to make when I’m in your town.

Fun fact: I once was a maid in New York City. Well, Park Slope. If my employers could only see my kitchen floor now–all spotted with sauerkraut drippings, goat berries, and drifts of straw–actually, they would not be surprised at all because I was a terrible, awful, sad, underpaid, lonely maid. When I last spent real time in NYC, I had been broke, kind of gimpy from a bike accident, and utterly overwhelmed by the city.

Last week I returned to the city that nearly killed me! Still broke, but walking fine, and no, not overwhelmed at all. I used to think the goal in New York was to look like I knew what I was doing: to know which side of the subway door to depart from, to walk with real purpose, to never appear lost. Maybe it’s because I’ve gotten older, but this time around, none of that mattered. I was happily confused to ride the Air Train and not know how to pay. I was glad to repeatedly miss the free Ikea ferry to Red Hook. I often walked in circles in the Lower East side, and even ate at a terrible, fake “diner” where I paid too much for coffee and a bad (even in NYC!) bagel.

I was in New York to promote my book for two days, just a quick in and out. I had the fun experience of running (in clogs) down Avenue of the Americas because I was late to a talk at Bryant Park. It was a green panel discussion held during the lunch hour. I barely made it there by 12:30, gently sweating as I met my fellow panelists, the guy from Terracycle, an editor from Edible Brooklyn, and an environmentalist author of Sleeping Naked is Green. A business suit guy yelled when he heard the title of her book and came up to her during the panel discussion so she could sign his copy of the book. I talked about children growing carrots, and somehow, pot.

That night, I ventured into Brooklyn, a place where I had washed sheets and scrubbed counters, stolen cheese, subsisted on peanut butter. My reading was on a rooftop farm in Greenpoint. The farmer, Ben, is the real deal. He has 6,000 square feet of vegetables performing mightily: eggplants, cucs, tomatoes, herbs. They sell to restaurants and at a farm stand. The roof was treated like any green roof, Ben explained, many layers, membranes, water collection/diversion channels. But instead of planting grasses and flowers, they hauled in tons of compost, mixed it with perlite, and created French intensive-style beds to grow veggies.

The farm is above the Brooklyn Kitchen, a retro kitchenware store and place that teaches classes about such things as cheesemaking and canning. They set up a table and handed out bread with goat cheese and fresh vegetables from the garden. I had my prosciutto with me and shaved off bits to share with the 40 or so people. Then I read some from my book, looking out at the Manhattan skyline whenever I dared glance up from the pages. It did feel like a victory. To come back to a place that had kicked my ass, to return as a published author, and to be reading to a rapt audience.

That night I had insomnia and called Bill to remind him to make sure the male rabbit had enough water. It was 4:45am in New York, only 2am in Oakland. “Are you awake?” I asked. “I was just about to fall asleep!” Bill yelled. I told him I had remembered about the rabbit, and was worried because it had been so hot out, and then hung up. I still couldn’t go to sleep. I could hear New York waking up in my hotel on 54th Street, the big trucks rumbling around, the tour buses gearing up for another day on the town. Maybe I was nervous because later that day, I was going to go on the Leonard Lopate show, a live radio show at WNYC, and then I would fly home.

Later that day, while I answered Lopate’s questions, I tripped out that I was here, in NYC, telling people about Oakland, about my little farm, my daily chores, what the neighbors thought of me (I still don’t really know), what animals I had now, and who was taking care of the animals in my absence. I had a rush of total sadness, as I recited the things doing in the East Bay. And when I returned home late Friday night, the first thing I did was go out to the goats, corraled them into the sleeping area, shut the gate, made plans for morning milking, and felt a sudden relief as if I had been holding my breath in New York the whole time I was there.

As some of you know, I’m lucky to be involved with the most bad-ass group of women, the biodevas of the Biofuel Oasis. We’ve been slinging biod in Berkeley, CA since 2003, and now our dreams of becoming an urban farming headquarters is coming true.

Many years ago, we all talked about how we really wanted to diversify and sell something in addition to biodiesel. Healthy versions of gas station snacks didn’t seem radical enough. But urban farming supplies did. It fits into the whole model of DIY empowerment, of questioning where everything comes from, and learning new things. We’re now selling rabbit feed, chick starter, beekeeping supplies, and straw bales. And although we were a bit timid at first, it’s becoming clear that people really do want these things in an urban setting. We sold out of our beekeeping supplies within a month! We have new customers every day who want to buy high-quality, local, organic animal feeds and grains. It’s so fun.

And now we’re taking it to the next level: classes.  The first one, Backyard Chickens 101, will be held July 26, 10-1 and will be taught by yours truly. I’m going to cover coop building, nutrition, city ordinances, chick care, health, and troubleshooting. We’re also bringing egg-y snacks! The class costs $25, but if that’s too expensive, we were blessed with a Rainbow Grocery Coop grant to offer scholarships–just call the Oasis (510.665.5509) and ask about signing up for the scholarship. Otherwise, you can sign up here

The following month Jennifer Radtke is teaching a beekeeping class, and then a biodiesel home-brew class. Check it out, and take food production into your own hands.