Me and Joan Gussow

I planted asparagus yesterday. It’s something I’ve been meaning to do for years at Ghosttown, but as a squat farmer, I hesitated, and hesitated, and hesitated. It takes three years before you get a sizeable harvest, and so I figured it would be folly to plant any asparagus. Looking back on it, if I had planted crowns when I started, we’d have had five harvests under our belts. Oh well.

In the perfect timing department, the crowns came in the mail the same day I got the property tax bill (shit!) as a sweet reminder of the pleasures and pain of land ownership. I bought green California Davis asparagus crowns from Peaceful Valley; and then a lovely fan (Stan!) sent me some gorgeous, huge, crowns for the purple asparagus that he grows up in Arbuckle.

Coincidently, I’m reading Joan Gussow’s book Growing, Older and just got to the part where she talks about planting asparagus, and what a pain in the butt it is, having to dig a two foot deep trench in the garden, soak the crowns in water, then shore them up with good compost. Joan’s 80 years old and has been growing a huge garden and writing about nutrition for over 20 years. She wrote This Organic Life: Confessions of a Suburban Homesteader over ten years ago, and has been called the matriarch of the organic movement. In fact, if you read some of her essays, you’ll see that she coined some phrases that other people have coopted for themselves, like “our national eating disorder.”

About asparagus Gussow talks about losing her beds from chronic flooding of her river-front property. Instead of giving up, she decided, in her eighties, that she would start again by planting some asparagus from seed–now that will take a long time to produce! She writes, “…if Nature is willing, I might have, one day, short of my nineties, an actual bed of asparagus.” If an eighty-year old is planting asparagus, you should too. Don’t delay, plant some asparagus today.

The exciting thing is: Joan’s coming to San Francisco! I’m the lucky little devil who gets to interview her on-stage at the Commonwealth Club. Yay! Here are the details:

Another thing not to hesitate about? The scion exchange! My plan is to bench graft a bunch of apple rootstock so I can make a Belgium fence with heirloom varieties! Should take about ten years…The scion exchange is in El Sobrante this year, Saturday January 22, 12-3 at 4555 Hilltop Drive. See ya there!

Getting my Sh*t together

My vacation sucked. Baja was freezing. My old back hated sleeping on the beach. It snowed in Arizona. We did eat some amazing borrego tacos (lamb!) and soaked in the hot springs of Puertecitos, but for the most part I felt like I should have stayed at home or gone to Hawaii (never been) like the Obamas.

When I got home, I felt grumpy. Luckily, I cleaned my house before we left so the bed was made and Kuzzin was waiting with open paws for us. My farmgal Friday, Amy, did a great job taking care of the animals, so all was fine on that front. Still, I felt blah. I blamed it on 2011. I blamed it on my birthday (so close to 40). I blamed it on the fact that I just found out it’s going to cost me $20,000 to get a water meter on my abandoned lot. That’s almost how much I paid for the land! I freaked out that Blue Shield is raising my health insurance (i can only afford to have catastrophic in case I get hit by a bus…). I got my first bill for property taxes for the lot, and had to pay liability insurance for it too. Being a responsible adult is so lame and expensive. And I’m not even being that responsible.

That was my state of mind when I first faced 2011. I hunted some flies with my zapper racquet and felt a little bit better. Then I started thinking about little things that I could do to make myself feel better. I mucked out the rabbit area. I fixed the hay “barn” so it won’t fall over during a strong wind. I made some cheese. I mucked out the goat area. I did some weeding. I rearranged the goat milking room. I started thinking about how I want to do things differently this year. I want to streamline my operations so they are pleasurable, not a pain. One of the biggest problems has been with my hay manger.

The manger used to be two sets of window bars lashed together and set on a chair. I had the pleasure of having Gianclis from Pholia Farm over this summer and I asked her (goat expert) how I was doing. I mean, did she think the goats looked ok, had enough room, etc? She said yes, especially because of the stairs, and they looked very healthy. The one thing she said I should do is get a real hay manger. We looked at the homemade manger, hay spilling everywhere, and I realized she was so right. Contrary to popular opinion, goats are actually picky eaters and if hay falls on the ground, they won’t eat it. Even if it’s their fault it fell on the ground. That’s just goats. And my ghetto window bar manger allowed them to pull hay from the side where it would fall to the ground and make a big mess. But I can’t build for shit, and the hay mangers I’ve seen at the feed stores seemed overkill and expensive. Enter my birthday money from my mom (thanks ma!). I drove up to Larsen’s feed in Cotati and bought the Ruff Ranch feeder. It wasn’t cheap: $240. But look how happy this goat is now. 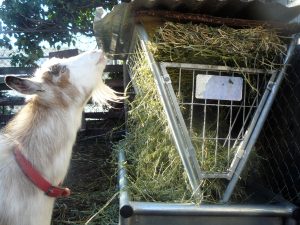 When I installed the manger, I sat and watched the goat enjoy using it. I think they like the challenge of reaching through the bars to get the good bits. And they are wasting 80% less hay. Organic alfalfa is not cheap, either, so perhaps the Ruff Ranch manger will save me money over the long-term.

This kind of pleasure isn’t cheap, but the pleasure of doing something right made me feel good and somewhat responsible. I realized that I just have to set goals, save money, and work slowly. So often I want things to happen quickly, but I realize that change is slow, it takes time to recognize how something can be easier/quicker/better.

So I guess it’s going to be a few years before I save enough money for a water meter, or building an outdoor kitchen, or a greenhouse but pleasure is often sweeter when you’ve waited and yearned. On that note, I’ll be having my first 2011 Farmstand and Food Fundraiser on February 27 (Sunday) from 11am-2pm. Stay tuned for details…And Happy New Year!