New Year Resolutions for the Farm

I love writing to-do lists. Not following them, not x-ing them off, but simply writing a list of goals. The end of the year happens to coincide with my birthday, so it’s a good time to take a look at what I’ve done and what I hope to do the next year. I’m turning 37 this year, and it’s my 7th year of squat farming in Oakland. Here’s to another seven!

Increase productivity. This year, I’m creating French intensive beds. For awhile I was trying to do those hippie permaculture jungles, but I’m starting to see that for me, it isn’t as productive or easy to harvest as it could be. So I’ve made four raised berms and planted row crops. My idea is to harvest everything at once, add compost, and then plant a new crop. I’ll still do interplanting, but it’ll be more organized. I want to start using the fence more as a scaffolding for growing stuff like grapes and cucumbers, too. With more productivity, I’m going to look for a better distribution model, too.

Save more Water. This summer was drier than a pot smoker’s mouth at dawn. Billy and I really curbed our house water use, and we re-used tons of greywater, but I’m realizing that perhaps summer is not the best growing season for California. To that point, I’m going to grow another crop of dry-farmed tomatoes. But i’m also going to plant a dry-land cover crop in May in many of the beds, and let it run its course through June, July, and August. I can use it for animal fodder.

Pull out Ornamentals. I planted an echium and melianthus major about five years ago and they are huge now. Huge and not producing anything very edible or beautiful. So out they go! I’ll replace them with fruit trees, and a lil’ duck pond.

Deal with Bermuda Grass and that F-ing Perennial Buckwheat. Two horrible weeds. The fact that someone actually gave me the buckwheat just pisses me off. It refuses to die. It also refuses to taste good, and even my animals won’t eat it. This spring, I’ll be hosting a big weed pulling party. I might even hire some local workers, but that last stand of weeds has to go!

Muscovy Ducks. I am in love with duck confit. Ducks are also great because they reproduce on their own, grow quickly, and are downright cute. And so, our plan is to get a breeding pair of Muscovies and let them do their magic in the garden. We hope they don’t destroy the various vegetable beds. They are going to live in this car–our gutted 240D–at night.

Breeding Hens. A dear friend gave me five of her bantam hens. They are raised by their mother and are more feral than tame, but I think they will be good setters. My idea is to bring a rooster in for my big girls, get them knocked up, and then stash their fertilized eggs under the bantams, who will hatch them out. My goal is to avoid ordering day-olds from the hatchery, if possible.

Rabbit Hides. I need to process the many ones in my fridge and actually figure out a way to use the pelts in a way that honors and celebrates the rabbit. We’re planning a big rabbit gala with Meatpaper and OPEN in early February, so stay tuned.

Guinea Hogs. I know, I said I’d never raise a pig again. But now someone told me about the marvelous, diminutive guinea hog. Never getting bigger than 250 pounds, these delicious piggies weigh 100 pounds or less, and would be perfect for my small farmelette. Dumpsters here I come again!

Requeen. It’s been a while, but I think I need to requeen my bee colony. I love the girls, but they are not as productive as they should be! I’m hoping to catch another swarm and get a second hive going.

Cob Oven. This is on my list every year, and every year it goes by without getting done. But really, it would be wonderful to make pizza and pies, breads and cakes, right?

Cheese Cave. So far, I have a cheese closet. But I’m confident it can be turned into a functional cheese cave. I just have to get some fans, themometers, and various coolers. I want to experiment with making some rind-y cheese, and one day will figure out how the hell Cypress Grove makes Humbolt Fog. This may involve some kind of apprenticeship. These are, from left to right, bandaged goat cheddar (larded with duck fat), fresh chevre, and the 95% humidity requiring Blue Goat.

Wild Food. Sometimes I feel like a dumb-ass farmer trying to grow stuff when nature provides, if you know where and when to look. I want to try to do more harvesting in the wild–acrons, bay nuts, ‘shrooms, nettles, and berries. Maybe some hunting.

Happy New Year to you all; thanks for reading! And please feel free to share your goals on your farm/garden/patio…

I love to say it: merry fucking christmas.

But this year, and I hope for the rest of my time on planet earth (until I become a final hour Christian, har har) I have already celebrated my holiday and I’m all done with this year. The solstice, for me, is the real deal, the real day of celebration, the ‘real’ last day of the year. It’s the shortest day and longest night, but there’s optimism: we reached the turning point when we start getting closer to the sun again. It’s a hopeful time, and Bill and I celebrated by building a fire and opening up our presents sent from loved ones.

The best gift of the year came from my mother–it’s a cheese press!

Above is Bill assembling it; below is it in action, pressing 50 pounds of pressure (I hung 15 pound bags of flour and rice at the end) to my goat cheddar. Ready in 2 months.

I love the end of a year because it becomes a time to think about plans for the New Year.

2010, for me, is going to be the year when I finally grow up and start dealing with my meager finances in a sane way. Lots of people think that because I published a book, I’m rolling in the dough. Alas, this is not true, book sales were good, but not great, and I’m still as broke as ever. While I love the freedom of being a poor writer, I’m getting a little worried about my future: what if I get sick, what if I want to have a baby, what if I want to finally be able to own a lot and plant trees for the future instead of squat farming? 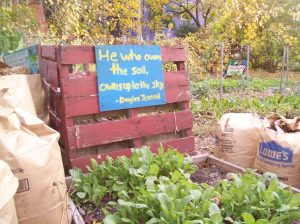 I’ve always had conflicted feelings about owning property–can you really own land? Aren’t we all just passing through? And I hate the idea of owning a house with all kinds of problems and property values and all that crap. My dream for some time has been to buy a small parcel of land in Oakland. I would plant an orchard, run some chickens on it, and feed the people in the neighborhood, in addition to selling weird stuff like Persian mulberries or Green Gage plums to fancy restaurants to pay the rent. In order to buy a lot, though, I have to save up and raise a bunch of money (most banks will not finance a vacant lot).

In order to save money, I might do what my sister Riana, did, where she has pledged to not spend any money for a whole year. I might ask my friends who are good with money how they do it. I might have to do another 100-yard diet, because I’m guilty of spending most of my disposable money on food. To raise money, I’ll have to get mighty crafty. Stay tuned in January for that plan…

Finally, thanks to everyone who came to the Open House at the farm last weekend. Sorry if you didn’t get to do the goat tour–I had no idea so many people would show up! Despite the crowds, there are extra Goat Town T-shirts available. Mostly women’s sizes and shapes. Let me know if you’d like to buy one. They are $25 with postage.

Posted on December 7, 2009 by novellacarpenter | 12 comments

Due to popular demand, I’m going to have another farm tour!

How: Don’t park on 28th Street!! Park on MLK, and walk over. Please. I’ll give you the stink-eye if you drive down 28th Street, which is a dead-end street where my neighbors enjoy parking their cars.

My garden looks like hell, especially in December, so arrive with low expectations.