One of my ducks started another nest of eggs, near the busy MLK street side of my garden. She pulled out a bunch of soft downy feathers and settled in right next to the chain link fence. I thought: good luck with that. Periodically eggs would roll from the nest under the fence to the sidewalk. I watched a few passersby pause, look at this greenish egg rolling around with the ubiquitous Dorito bags, and then gently push the egg back into the nest.

So it’s through a community effort that these ducklings finally hatched. 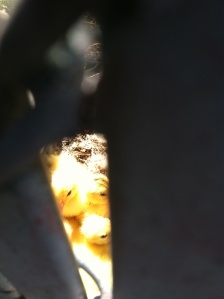 They are certainly adorable. But then they grow up. What’s a girl to do that has a pending permit from the City of Oakland that says: “No slaughtering or butchering of animals allowed?”

With previous hatches, I had been lucky and bartered with people–they got ducklings, I got some produce. But a few duckies did stick around and they grew up, and I had some big ducks on my hands. I figured it would be pretty easy to find a slaughterhouse. Nope. One place I called said they don’t process ducks, just chickens. Another said they had a 100 duck minimum. Finally I found a place in Manteca that would process my measly 8 ducks. Manteca is an hour’s drive away. To process 8 ducks, it would cost $80 ($10/duck). The paradox that I could buy a cooked duck from Chinatown for less than $10 was not lost on me. Still, I went. I didn’t have many other options. 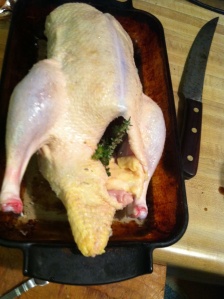 The trip to Manteca was actually kind of fun because my friend D came along, and of course so did Billy and baby Francis. The slaughterhouse was a real mom and pop affair, not the nightmare PETA video places that I imagine when I think slaughterhouse. They did an outstanding, quick, clean job with the ducks. Much faster than I would, and less painful–my fingers really get weary trying to get all those pin feathers. Although $10/duck seemed high, I realized that if someone had walked up to me and said, “i’ll do that for $10,” I do believe I would have gladly handed them the duck.

The money’s spent, the fuel burned, I’m not mad about it. But I do wonder how this Oakland no slaughter law will work for someone with no car and no cash.

We’ll see how this batch of ducklings turn out. I’ve made a couple barters with folks to trade ducklings for things like eggs or tomatoes. Contact me (novella.carpenter@gmail.com) if you want to do this with this hatch…